BizWize is here to help you navigate the CEWS application process and avoid potentially costly errors.

To be eligible to receive the wage subsidy, you must meet all three criteria:

Even if you didn’t have a payroll account on March 15, you may still qualify if

2. Be one of the following types of employers

3. Have experienced a drop in revenue

ENSURING STRONG SUBSIDY SUPPORT FOR THOSE WHO NEED IT

Effective July 5, 2020 (i.e. Period 5 and subsequent periods), CEWS would consist of two parts with respect to the remuneration of active employees:

A separate CEWS rate structure would apply to furloughed employees (as described below).

In addition, a safe harbour would be available to ensure that, through August 29 (periods 5 and 6), employers would have access to a CEWS rate that is at least as generous as they would have had under the initial CEWS structure.  More information is available further on in this bulletin.

Base subsidy for all employers impacted by the crisis 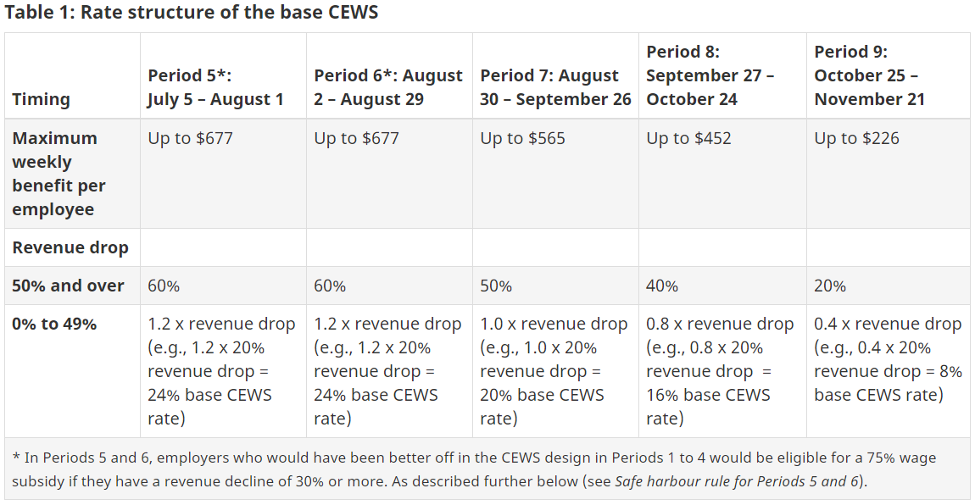 TOP-UP SUBSIDY FOR THE MOST ADVERSELY AFFECTED EMPLOYERS

A top-up CEWS equal to 1.25 times the average revenue drop that exceeds 50%, up to a maximum of 25% (attained at a 70% revenue decline) would be available to employers with a revenue decline of over 50%. Generally, an eligible employer’s top-up CEWS would be determined based on the revenue drop experienced when comparing revenues in the preceding 3 months to the same months in the prior year or to the average monthly revenue in January and February 2020.

As with the base CEWS rate, the top-up CEWS rate would apply to remuneration of up to $1,129 per week.

The top-up CEWS rate for selected average revenue drop levels is illustrated in Table 2 below. 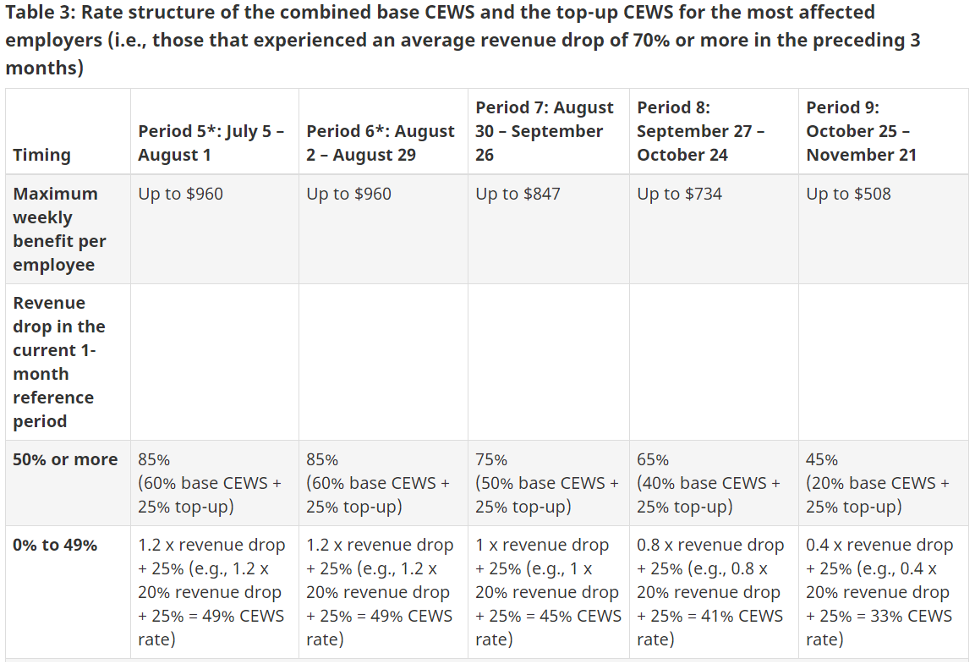 * In Periods 5 and 6, employers who would have been better off in the CEWS design in Periods 1 to 4 would be eligible for a 75% wage subsidy if they have a revenue decline of 30% or more. As described further below (see Safe harbour rule for Periods 5 and 6). 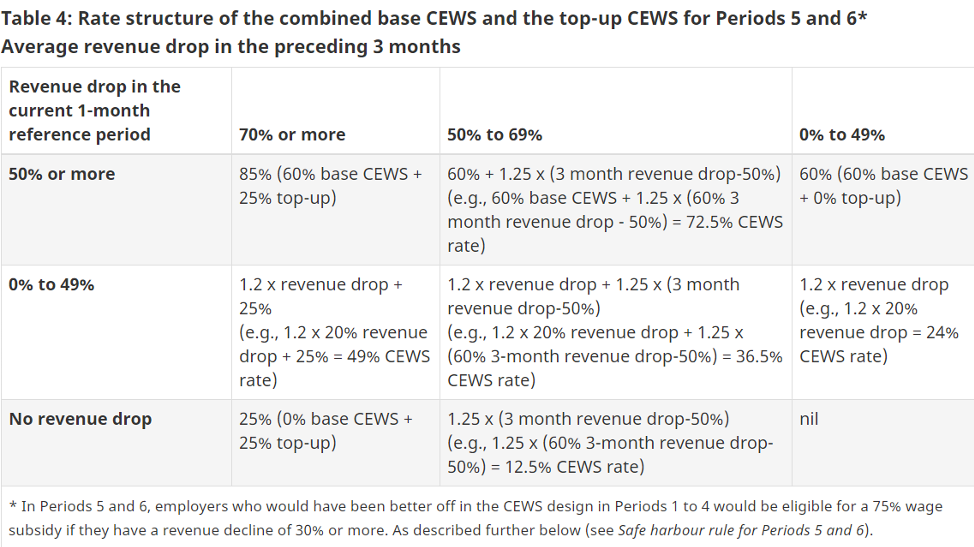 SAFE HARBOUR RULE FOR PERIODS 5 AND 6

For Periods 5 and 6, an eligible employer would be entitled to a CEWS rate not lower than the rate that they would be entitled to if their entitlement were calculated under the CEWS rules that were in place for Periods 1 to 4. This means that in Periods 5 and 6, an eligible employer with a revenue decline of 30 per cent or more in the relevant reference period would receive a CEWS rate of at least 75 per cent or potentially an even higher CEWS rate using the new rules outlined above for the most adversely affected employers (up to 85 per cent).

For Periods 5 and 6, the subsidy calculation would remain the same as for Periods 1 to 4. It would be the greater of:

Beginning in Period 7, CEWS support for furloughed employees would be adjusted to align with the benefits provided through the Canada Emergency Response Benefit (CERB) and/or Employment Insurance (EI). This would ensure equitable treatment of employees on furlough between both programs, provide greater clarity to workers as to their compensation as compared to a changing subsidy rate based on their employer’s revenue in a given month and, when combined with draft legislative changes to the interaction with the CERB (i.e., the elimination of the 14-days rule, as discussed below), make it easier to transition employees on to CEWS so that they are reconnected with their employer.

For Period 5 and subsequent periods, the CEWS for furloughed employees would be available to eligible employers that qualify for either the base rate or the top-up for active employees in the relevant period.

There are no changes to the definition of eligible remuneration. Eligible remuneration may include salary, wages, and other remuneration like taxable benefits. These are amounts for which employers would generally be required to withhold or deduct amounts to remit to the Receiver General on account of the employee’s income tax obligation. However, it does not include severance pay, or items such as stock option benefits or the personal use of a corporate vehicle.

For active arm’s-length employees, the amount of remuneration is based solely on actual remuneration paid for the eligibility period, without reference to the pre-crisis remuneration concept used for earlier CEWS periods.

A modified special rule would apply to active employees that do not deal at arm’s length with the employer. For Period 5 and subsequent periods, the wage subsidy for such employees is based on the employee’s weekly eligible remuneration or pre-crisis remuneration, whichever is less, up to a maximum of $1,129. The subsidy would only be available in respect of non-arm’s-length employees that were employed prior to March 16, 2020.

An employer’s revenue for the purposes of the CEWS is its revenue in Canada earned from arm’s-length sources. Revenues from extraordinary items and amounts on account of capital are excluded.

Note: If you choose to use the cash method, you need to check the “cash method” election box when completing your application.

For registered charities and non-profit organizations, the calculation includes most forms of revenue, excluding revenues from non-arm’s length persons. These organizations are allowed to choose whether to include revenue from government sources as part of the calculation. Once chosen, the same approach would have to apply throughout the program period.

Special rules for the computation of revenue are provided to take into account certain non-arm’s-length transactions, such as where an employer sells all of its output to a related company that in turn earns arm’s-length revenue. As well, affiliated groups are able to elect to compute revenue on a consolidated basis.

REFERENCE PERIODS FOR THE DROP-IN-REVENUES TEST

For the purpose of the base CEWS, eligibility would generally be determined by the change in an eligible employer’s monthly revenues, year-over-year, for the applicable calendar month. Table 5 below outlines each claiming period and the relevant period for determining an eligible employer’s change in revenue. For Period 5 and all subsequent periods, an eligible employer would be able to use the greater of its percentage revenue decline in the current period and that in the previous period for the purpose of determining its qualification for the base CEWS and its base CEWS rate in the current period. This would provide certainty and be a continuation of the rules for Periods 1 to 4 that allowed an employer that met the revenue test in one period to automatically qualify for the following period. 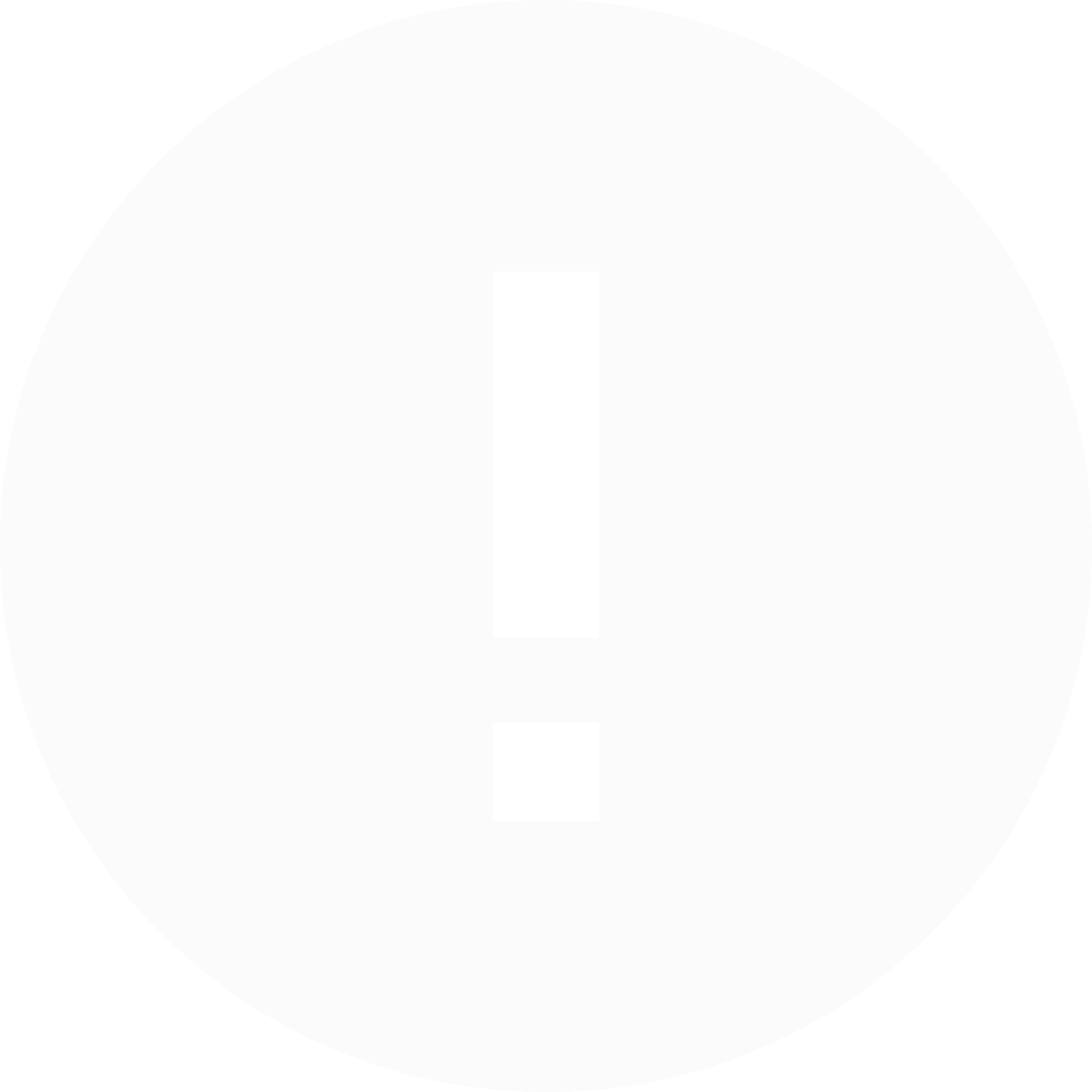